"Our own life has to be our message"

Zen Master Thich Nhat Hanh is a global spiritual leader, poet and peace activist, revered around the world for his pioneering teachings on mindfulness, global ethics and peace. 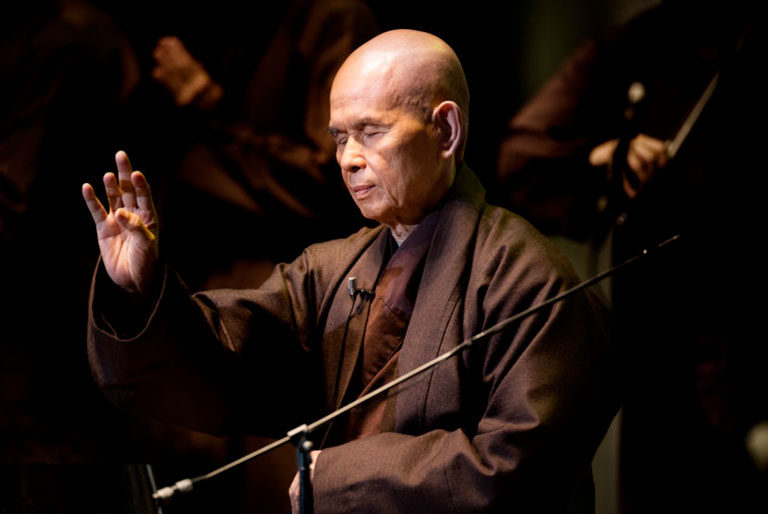 Ordained as a monk aged 16 in Vietnam, Thich Nhat Hanh (Thay) soon envisioned a kind of engaged Buddhism that could respond directly to the needs of society.

He was a prominent teacher and social activist in his home country before finding himself exiled for calling for peace.

In the West Thay played a key role in introducing mindfulness and created mindful communities (sanghas) around the world. His teachings have impacted politicians, business leaders, activists, teachers and countless others.

We have to walk in a way that we only print peace and serenity on the Earth. Walk as if you are kissing the Earth with your feet.

Thich Nhat Hanh has published over 100 books, including classics like The Miracle of Mindfulness and Peace is Every Step.

He has applied Buddhist insights to every aspect of society, including education, business, technology, and the environmental crisis.

In 1967 Thich Nhat Hanh has been nominated by Martin Luther King Jr. for the Nobel Peace Prize.

I do not personally know of anyone more worthy of this prize than this gentle monk from Vietnam. He is an Apostle of Peace and Nonviolence. His ideas for peace, if applied, would build a monument to ecumenism, to world brotherhood, to humanity.

Thay teaches mindfulness within the context of ethics. With the energy of mindfulness comes mindful consumption, mindful relationships, and ethical livelihood. You cannot separate mindfulness from mindful speaking, acting, working, and engaging in the world.

Mindfulness is not a tool or instrument to get something else—whether that something is healing, success, wealth or winning.

True mindfulness is a path, an ethical way of living, and every step along that path can already bring happiness, freedom and wellbeing, to ourselves and others.

Happiness and wellbeing are not an individual matter. We inter-are with all people and all species.

Thich Nhat Hanh’s teachings on “interbeing” (a term he coined in the 1980’s) have led the way in Buddhist deep ecology. Referencing ancient Buddhist texts, such as the Diamond Sutra, he explains Buddhist teaching of “no-self” in the light of ecology: “we cannot separate human beings from the environment.

He advocates a human-based solution to solving climate crisis. “We need more than just new technology to protect the planet,” says Thich Nhat Hanh. “We need real community and co-operation. We need to re-establish true communication—true communion—with ourselves, with the Earth, and with one another.”

Only when we can touch real love for the Earth, he says, will we have the immense energy we need to make the radical changes necessary to save our civilisation.

On 11 November 2014, a month after his 88th birthday and following several months of rapidly declining health, Thich Nhat Hanh suffered a severe stroke. Although he is still unable to speak, and is mostly paralyzed on the right side, he has continued to offer the Dharma and inspiration through his peaceful, serene and valiant presence.

Thich Nhat Hanh is currently residing at Từ Hiếu Temple in Vietnam where he ordained with his teacher when he was sixteen years old. He has expressed a wish to stay there for his remaining days. He comes out regularly in his wheelchair to visit the temple altars and to lead the sangha on walking meditation around the ponds and ancestral stupas.